Interested Nobles are encouraged to form a Legion of Honor within your Shrine Center. A Legion of Honor is a unit within the Shrine comprising Nobles from your Shrine who are also veterans/members of the various branches of a county's Armed Forces and its Allies.

A Legion of Honor unit is formed for the purposes of:

1.         Promoting a closer fraternal and social relationship among its members.

5.         Devoting your efforts as individuals and Legion of Honor members.

If sufficient interest is found, appoint a committee to seek an audience with your Illustrious Potentate in order to obtain authorization for the formation of a Legion of Honor unit within your Shrine. The foregoing six points of purpose would be a good starting place for reasons to organize such a unit.

As soon as authorization for the formation of a Legion of Honor is obtained, the committee should proceed to send out cards or letters and/or contact all known ex-servicemen and servicemen within the Shrine. You should consider inserting an ad in your Shrine magazine relative to the proposed organization of the unit. If the committee finds that they have ten (10) or more interested Nobles, they should call an organizational meeting. The meeting should appoint temporary officers and committees as deemed necessary. This being a military oriented unit, you may want to appoint a Commander, Lieutenant Commander(s), Drill Captain, Finance Officer, Quartermaster and Warrant Officer, as versus President, Vice President, etc. Suggestions for activities should be discussed at this meeting, such as (1) Uniformed Unit, (2) Non-Uniformed Unit, (3) Color Guard, (4) Degree Team, etc. Service to be performed should be something outside the field of the present uniformed units of the Shrine, or perhaps something that the Illustrious Potentate might like or need.

A permanent organization meeting should be called by the temporary officers. At this meeting, all plans should be drafted to be submitted and adopted at the following regular unit meeting. Included should be your regular meeting night, time and location. You will want to secure a night from your Shrine Recorder if your Shrine is to be your meeting location. Permanent officers should be voted on at this meeting, which may or may not be the temporary officers. These officers should be sworn in by your Illustrious Potentate or his designate and should remain in office until your next annual election. Have your plans made and answers ready for any questions that may be brought up; then you will have a smooth running meeting.

The proposed list of members should be promptly notified of the date and place for the permanent unit meetings. Avoid any unnecessary delays between your meetings whereby interest may be lost or other units being formed are recruiting members.

3.         Instill in each unit an unswerving loyalty to its Illustrious Potentate and Shrine.

4.         Cultivate a spirit of comradeship among all Shrine organizations.

5.         Assist in upholding the principles of Shriners International.

The goal of the International Association is to become large, strong and permanent in the service of Shrinedom. In the 147 Legions of Honor in the 192 Shrines there are approximately 8400 Legion Nobles. All of these Legion of Honor units are working corps of their respective Shrines under the control and authority of the Illustrious Potentate. The Legion Nobles, the Legion of Honor units and the International Association are as one in purpose, namely to be Nobles of Shriners International, organized as service units for service to their Illustrious Potentates and Shrines and to assist in any way they can our twenty-two (22) Shrine Hospitals.

That pretty well spells out what a Legion of Honor is, what it does, and suggestions for what it can or might do. The Legions of Honor meld together the Armed Forces with the Nobles of Shriners International into a very proud unit of Legion Nobles. You should want to join the finest units in Shrinedom. If you need assistance or additional information, contact the nearest Shrine that has a Legion of Honor.

ITS AN HONOR TO BELONG TO THE LEGION OF HONOR

VETERANS AND/OR MEMBERS OF THE ARMED FORCES 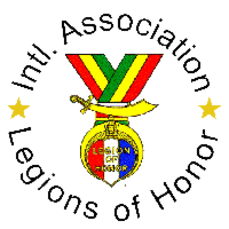